Half of the 80,000 inhabitants of Chiclana live in houses for which no building permit was granted


They now find themselves trapped in a nightmarish legal limbo 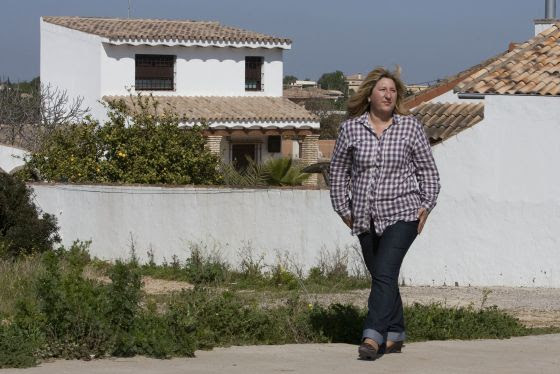 Marisol Ayala, the councilor for town planning in Chiclana, in front of an illegal housing estate. /EDUARDO RUIZ (EL PAÍS)

There is a town in the province of Cádiz where nearly half of the nearly 80,000 residents live in illegal homes. Even the city planning councilor lives in one of them.

This town is Chiclana, and it is trapped in a legal limbo that has forced it to return to a planning regulation dating from 1987 because the courts canceled all its later zoning plans and it cannot grant any new first occupancy licenses, a legal requirement in Spain.

Marisol Ayala, the local chief of city planning, got the post after creating a political party representing residents of these illegal homes. The party's program included a request for amnesty for their homes, fine reductions and a chance to rejoin legality at a minimum cost.

Ayala, who was born in Burgos province, moved to Chiclana a decade ago. She came here with her husband and son and bought a house in a development called Rana Verde on land that was classified as not for building. She says she came looking for peace and quiet.

The councilor for town planning herself lives in an illegal home

Although her home was no longer facing any fines because the statute of limitations on her offence had run out, there were still a host of problems to deal with: there was no running water or sewer system, for instance. There were 15,000 other homes in the same condition in Chiclana.

Anywhere else, for the planning councilor to live in an illegal home would be considered a scandal. Here, it is simply viewed as yet another episode in the story of indolence and chaos that ruled the town.

Nobody knows how it all began, or who took the first step. Chiclana progressively grew while authorities turned their eyes away from the fact that walls were going up on rural land, flood zones and protected areas. Within the walls, homes were built. And people came to live in these homes.

Half the residents of Chiclana live on 18 million square meters of land where construction is legally not allowed. The real estate boom of the 1980s and 1990s created a clearly profitable, if legally questionable, business in which homes were bought and sold even though they did not show up on any city zoning plans. Everyone participated in this business. The locals built and sold the properties, other people bought them, the banks approved the mortgage loans, the notaries signed the deeds and the town council levied the corresponding fees. And the wheel kept turning.


That's equivalent to putting the wolf in charge of the herd," environmentalists say

It was not until the early 21st century that Chiclana, ruled until then by the Socialist Party, began regularizing homes. It established fees that each homeowner should pay to bring basic services like running water, sewers or power. An average calculated by the residents shows that the owner of a 1,000 square-meter plot of land would have to pay around 38,000 euros.

"Very expensive," said the residents. And they decided to rebel. Marisol Ayala was one of them.

They created a group called Plataforma de Afectados por la Regularización, which the Environmental Attorney's Office once described as a lobby, and whose main goal was to turn something illegal into legal with the minimum outlay possible. Ayala led large public protests.

Then, in 2007, the Popular Party (PP) was voted into power, and Marisol Ayala saw that the new team was not paying attention to her claims either. That was the genesis for a political party of their own. "To bite from within," she said during her election campaign.

She campaigned door-to-door for her Partido Vecinal Regionalista (PVRE) - or the "purée" as they call it in Chiclana - promising amnesty for the illegal homes and lower fines for those where the statute of limitations had not run out. Some of her neighbors were being slapped with fines of up to 120,000 euros. Others were facing demolition orders.

Marisol Ayala received 2,843 votes in elections held in 2011, which gave her the right to two councilors. Hers was the third most voted party after the PP and the Socialists, ahead of the United Left. The PP began a minority rule, but in order to guarantee enough stability to get the budget approved, Mayor Ernesto Marín reached a deal with the PVRE, and appointed Ayala city planning councilor - that is to say, the department that decides on planning fines and home legalizations.

Marisol Ayala, representative of the owners of illegal homes, got the power that she desired.

"That's like putting the wolf in charge of the herd," warned environmental groups.

But the wolf turned out to be tamer than expected. Since taking over in May, Ayala seems significantly less driven. She barely speaks out during plenary sessions. The PVRE does not put forward any motions and simply votes favorably on whatever the PP wants approved. When she does speak, "her replies are very insulting. She laughs at us in our face. She does not call information committees, or give us the documents that we request of her," complains Ana Rodríguez, of the United Left, who boasts of representing the only party that never tried to reach a deal with Ayala.

The Socialists have also protested over Ayala's "rude" nature and described her occasional plenary interventions as "grotesque." In a recent letter, she asked residents not to build illegal homes. The opposition sees this as the epitome of chutzpah.

The PVRE chief does not grant interviews. The mayor speaks for her, and he does so to defend his government partner.

"We've been here for five months, and what we're trying to do is to undo the mess left behind by the Socialists," he says.

Is it a scandal that the city planning councilor lives in an illegal home? The mayor thinks not.

"It may be viewed that way from Madrid, but not from here. Half of Chiclana lives in illegal homes. It is a social problem and it requires attention."

Marín does admit that in the last five months nothing has been done for these residents. He says it is up to a new general zoning plan still in the works. This plan is meant to return Chiclana to the 21st century.

Meanwhile, the government of Andalusia is completing some provisional regulations that will at least grant first occupancy licenses to a town stuck in 1987.

Ayala has also failed her own people, says Joaquín González, the new spokesman for the citizen platform. "Not once has she met with us. She has not made a single investment in our streets. We're the same way we were before, or worse. We're second-rate residents when it comes to getting services, but first-rate when it comes to being charged 600 or 700 euros in property tax."