Marta Andreasen MEP has claimed Spain's secretary for housing 'is in denial' regarding the severity of the problems affecting British expats who have invested in Spanish property, following a heated exchange at an international property exhibition in London.

Spain's housing secretary Beatriz Corredor (pictured), who was in the UK promoting Spanish property this week

The argument took place following a speech delivered last week by the Spanish housing secretary Beatriz Corredor, who called for Britons to trust in Spain and to take advantage of its ripe property market.

UKIP's Marta Andreasen MEP said: "I was quite upset that she refused to accept or mention the fact that were serious problems affecting Brits in Spain.

"She referred to new reforms that had supposedly made Spain a safe country in which to buy, but these reforms neither resolve the past nor the present problems.

"The British are among the highest proportion of foreign property purchasers, but the bad reputation Spain has earned itself has seen the level of interest in Spanish property plummet. This so-called ‘property roadshow’ was to address that with the aim of portraying that everything is fixed and the Brits can start spending their money again. How wrong this is.

"Regional governments pick fights with local governments, mayors and politicans take bribes, then get prosecuted for corruption – it really is difficult for any British person to trust anyone throughout the home buying process.

"The minister made out that there were just one or two people with problems and that these were getting sorted out."

A decree to legalise existing illegal properties combined with a reduction in new home tax and falling house prices made Spain the ideal place in which to invest, said the minister during her address to an audience of developers, investors and protesting British investors who gathered at London's Docklands.

No mention was made of the many thousands of expats who have bought in good faith only to be told their houses are illegally built and therefore unsellable, and excluded from local water and electricity supplies.

It was the second time this year that the secretary had addressed a British audience of potential investors and explained why Spanish property is such a good investment.

The discussion between the pair was brought to a close by the Spanish Ambassador, Carles Casajuana, who led the Spanish housing secretary away after Marta Andreasen refused to shake her hand.

"I spoke in Spanish and in English so that people around would understand," said Ms Andreasen. "Afterwards I was approached by developers who said they too had been affected by the Spanish government's refusal to sort out the problem, and didn't expect to sales to pick up until the current problems had been solved."

The MEP has long campaigned on behalf of Brits caughts up in Spain's planning and property scandals. She is currently urging the EU to stop funding Spanish regions until they resolve these problems.

Telegraph Expat's Spanish Planning Scandal campaign is supporting the thousands of expats who have been affected by the illegal homes crisis in Spain. You can find all the latest news on the situation here.

When the Spanish government unveiled a new property register in English designed to simplify the buying process and clarify whether properties were legal and safe to buy, it was supposed to encourage British buyers to dip a toe back into the Spanish property market.

Despite the hype, Spain's online Land Registry service has been criticised as unreliable and out-of-date Photo: Frans Lemmens / Alamy

That was until users began to complain that the service provides what they say is misleading documentation in indecipheral English.

In exchange for €23 euros, prospective British buyers can search for a property online, carry out their own due diligence and, should they wish to buy one, receive a Land Registry Certificate that proves they bought their property in good faith. In theory completing this process guarantes them judicial support.

However, a check on a 5,000 square-metre property bought by Colin and Sandra Byrne in 2006 correctly states the size and description of the property in Albanilla, even down to the sloping ceilings and the fact that "the main front faces the mid day" [sic].

What it fails to mention is that the €275,000 property with a €25,000 landscaped garden is subject to a land grab by a developer, who plans to use half of the Byrnes' land as part of an urbanisation project that will include 47 car parking spaces, two houses and a public space.

Colin Byrne said: "The first thing that struck me was it looked as if someone had taken the information in Spanish from the records and 'googled' it into English.

"They described my plot, which is full of olive and almond trees, as 'a piece of dry land for cultivation of cereals with an area of 48 areas 80 centiares'.

"But more importantly for a prospective buyer, I would think, is the fact that my property is subject to a 'land grab', which went unmentioned on the document that cost me €23.

"A builder is planning an urbanisation and I and three of my neighbours stand to lose over 50 per cent of our gardens. The plans have been in Abanilla Town Hall since June 2007 and we had the official notification in 2010."

It is not just the translated documents that are giving cause for concern. The service seems to be equally flawed in Spanish.

A check on a house bought by Len and Helen Prior in 2003 reveals its location in Almeria and the fact it had a "rectangular pool with semicircular stair access", but doesn't disclose the fact it was deemed to be illegal. It was demolished in January 2008.

A search for details on a further two properties deemed illegal three years ago in Albox and subjected to demolition orders that were later suspended pending a retrial, returns no information relating to the properties' legal history.

The property service in English was rolled out shortly after Spain's housing secretary Beatriz Corredor came to London with the Spanish Property Roadshow in April this year.

Prior to her arival, she was reported in a Sunday Telegraph interview as saying: "Come here calmly, and trust in the system that we have and the transparency we provide.

"If there is not any mention of legal proceedings on the document, the person who buys the property through the correct channels will then know there is judicial support."

The online service was part of a package of reforms steered through the Spanish parliament in a bid to improve Spain's tarnished real estate reputation and boost its withered economy by encouraging investment.

There are estimated to be 700,000 unsold holiday homes in Spain, the majority of which are located along the southern coastlines, where property prices have dropped by as much as 60 per cent in certain regions.

The second leg of the Spanish property roadshow is currently in London, providing a platform for developers to sell their properties to UK buyers.

Telegraph Expat's Spanish Planning Scandal campaign is supporting the thousands of expats who have been affected by the illegal homes crisis in Spain. You can find all the latest news on the situation here. 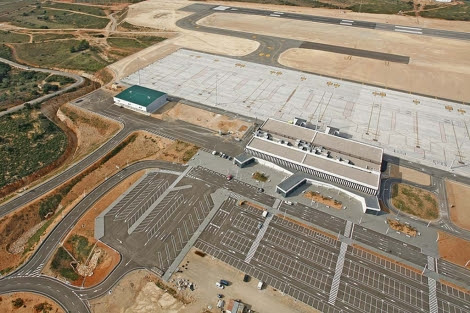 Only 11 of Spain's 48 regional airports are profitable and its newest project has yet to see a single passenger through its terminal.


The gleaming new air traffic control tower shimmers in the midday heat, visible for miles around, it rises up above groves of orange trees in the agricultural region of Castellón, north of Valencia.

But it has yet to guide a single aircraft onto the 3,000 yards of virgin runway at Spain's newest airport, inaugurated in March at a cost of 150 million euros (£130 million).

The metal clad terminal stands empty, its vast car park untarnished by a single vehicle, weeds growing up through the pavements, the only sign of life.

It is the newest example of infrastructure "white elephants" that litter the Spanish countryside, huge projects often funded by taxpayer money that helped drive Spain's economic boom and that have come to symbolise the wasteful spending contributing to its spectacular bust.

Castellón Airport promised to be a gateway to an undiscovered region, providing jobs for locals in a country struggling with 21 per cent unemployment rate, and delivering tourists tempted by cheap deals to some of Spain's most beautiful white sand beaches.

But six months after its completion it has yet to be awarded an airport license – a fact many attribute to political differences between the Conservative-run region and the socialist government in Madrid – still yet attract the attention of the low-cost airlines deemed so necessary for its success.

The fate of another of Spain's airports will do little to encourage investors in CastellÃ³n. Next month Spanish low cost carrier Vueling will cease to operate routes from Ciudad Real airport, 125 miles south of Madrid in Castile-La Mancha.

"Low profitability of the routes, increased cost of aviation fuel, and the stagnation of the Spanish economy have forced the decision," the airline said in a statement.

With only two flights a week it was the only commercial airline left operating.

The airport, the first privately-owned venture in Spain although publicly subsidised, opened in December 2008 costing close to 1 billion Euros and with the ambition of becoming a cargo and passenger in the shadow of the capital's Barajas airport. It was even called Madrid South.

But far from meeting its target forecast of 1.5m passengers a year, it managed only 100,000 in 2010, and saw airlines including Ryanair, Air Berlin and Air Nostrum drop it from their routes as unprofitable.

Last year the company that ran the airport went into receivership owing millions to contractors, and leading the Bank of Spain to take control of the regional savings bank Caja Castilla La Mancha which bankrolled the project.

Under specially negotiated employment contracts all airport personnel, even its executives, rotate with three months on the job followed by three months at home on the dole.

Another example is Huesca airport, opened in 2007 in the shadow of the Pyrenees in northeastern Spain, regional authorities hoped to attract skiers to its slopes, even subsiding the now defunct Pyrenair.

The last commercial flight departed in April, the next is not due until January. But the fully staffed airport still attracts visitors – locals drive out to the airport to dine in its air-conditioned cafés and restaurants.

During the height of the construction boom, authorities rushed to take advantage of low-cost airlines, to plan new airports and open up hitherto unknown regions to northern European tourists.

But of the 48 regional commercial airports built in the debt-ridden country in less than 20 years, only 11 make a profit.

As part of a series of austerity measures designed to wrench Spain out of its deep economic problems, Socialist Prime Minister Jose Luis Rodriguez Zapatero promised partially to privatise its airports. Negotiations are still under way.

Back in Castellón, residents are not at all surprised at the fate of Spain's newest airport.

"I always thought it was a stupid idea to build one here when we are less than one hour from Valencia airport and I was right," confessed Vicento Bore, a 78-year old pensioner playing cards with friends in the tranquil square of Vilanova d'Alcorea, a village with 700 inhabitants less than two miles from Castellon airport.

"To think that we were worried about all the noise of suddenly being in a flight path," he laughed. "What a joke."