British Press on Demolitions in Andalucia 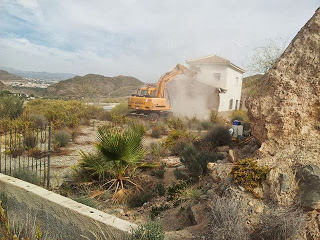 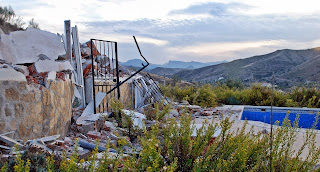 WOULD APPRECIATE YOUR HELP TO SPREAD THE NEWS WITH YOUR PRESS CONTACTS.


TWO British owned houses, located near the hamlet of Las Terreras in
the municipality of CANTORIA in ANDALUCIA, SPAIN, were demolished
today in an unannounced move by representatives of the Junta de
Andalucia, the regional administration, acting on a court order.

The demolitions resulted from proceedings started by the regional
government in 2004 against a local promoter relating to the
construction of FOUR houses without the planning permission. A firm
sentence of demolition was applied to all four houses in June of this
year and the promoter was ordered to demolish the properties at his
own expense and to compensate the four British home owners, who, as
acknowledged in the court judgement, had acted in good faith.

However, it is understood that the home owners have yet to receive any
compensation in spite of today's demolition.

Today (14th October), two of the four houses were demolished following
an instruction to execute the demolition order issued by the
Provincial Court in September 2013. The remaining two houses, also
British owned, face the same fate. The houses were vacated at the time
of their demolition.

There are an estimated 300,000 illegal properties in Andalucia
according to government estimates.

Two more British families, purchasers in good faith have lost their
home, and it appears that they have not been compensated, which  AUAN
considers to be against their most elemental human rights.

Note to Editors: The home owners involved in this case are not members
of our association and we are not directly involved in these cases but
we can help with local contacts if you require it.